On April 17, 2002 a number of U.S. Autism Ambassadors toured the Capitol Building in Washington by invitation of Senator Tom Harkin of Iowa. The following day, five ambassadors cross examined government officials representing the Centers for Disease Control and Prevention (CDC), National Institutes of Health (NIH), and National Institute of Mental Health (NIMH) concerning heavy metal toxicity and skyrocketing autism rates increasingly linked to vaccination politics and policies. I was among these five concerned citizens and professional panelists. What we witnessed during our tour of Capitol Hill prepared us for what we experienced during this Congressional hearing.

The linked photographs I took from the Capitol Building in Washington. The first

shows a portion of the Dome of the Rotunda in the Capitol Building central to the two wings in which (left wing) Democrats and (right wing) Republicans-our nation’s leaders-conduct business, establish policies, and enact laws impacting the health and safety of all Americans. The art was masterfully painted by Constantino Brumidi to reflect, according to government promotions, “the principles upon which the United States of America was founded.” Close inspection shows this angelic creature bearing the medical insignia in her right hand, and a bag full of money in her left. She is seen placing the bag full of money, as a bribe, down upon the desk of politicians in the act of writing legislation.

During the congressional hearing led by Indiana Republican Dan Burton, and other Congressmen including Connecticut Republican Christopher Shays, informed the audience that despite the stunning increase in autism rates with its established link to vaccines containing mercury (i.e., thimerosal), Congress had requested an additional $75 million for government officials favoring vaccines to study autism. Hearing officials determined that the CDC had commissioned a classified study that examined the impact of vaccines containing mercury on the brain, nervous and immune systems of children. Their altered report secreted a horrifying conclusion that America’s youth was, in fact, being crippled en masse by drug makers’ use of mercury in vaccines. Furthermore, Dan Burton alluded to the disturbing conflicts of interest common to the vaccine industry in which oversight agencies such as the CDC’s vaccine advisory board, ACIP, are frequently represented by paid industry officials and drug company scientists. Here, the majority of members favor policies supporting drug companies and vaccinations increasingly found harmful to the American people.

Given the above, I addressed my statement and single question to government officials thusly:

“How can we assure that putting the ‘fox in charge of the hen house,’ so to speak, will do what needs to be done-stop the autism epidemic-without a full, top to bottom, ‘house cleaning’ within the NIH, CDC, NIAID, ACIP, NIMH, and FDA, freeing this bureaucracy from special pharmaceutical industry biases and influences, especially since the lives of our children, our nation’s future, is at great risk?”

Unfortunately, as you can read in the Congressional Record, Rep. Shays felt compelled to defend these agencies, and block further discussion on this saying that it was neither the time nor place for this question.

I replied that I simply wished to assure the elimination of individuals with conflicting interests, particularly those within vaccine policy setting agencies and committees, such as CDC and ACIP, whose officials are routinely provided waivers in contrast to the current federal law (18 U.S.C. section 208) that discourages such conflicting interests.

It seemed to me that the angel bearing the medical insignia and bag of gold had dropped from the Dome of the Rotunda onto Representative Shays’s lap, as my reasoned advice was censored and politics proceeded as usual.

The next two photographs provide the context for these discussions, in fact our 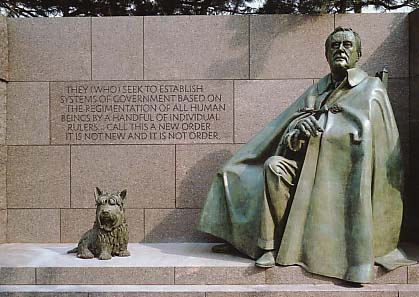 whole trip to Capitol Hill and this report. The first picture shows the Roosevelt Memorial from a distance. The second is a close-up of the inscription therein. This photo was obtained from a postcard in the gift shop of the Capitol Building that visitors traverse prior to exiting the nation’s leading policy-making site. The inscription reads:

“THEY (WHO) SEEK TO ESTABLISH SYSTEMS OF GOVERNMENT

BASEDON THE REGIMENTATION OF ALL HUMAN BEINGS BY A HANDFUL OF INDIVIDUAL RULERS. CALL THIS A NEW [WORLD] ORDER. IT IS NOT NEW AND IT IS NOT ORDER.”

As a retired liberal Democrat who matured into a conservative Republican before embracing Liberatarianism, I suspect President Roosevelt was privy to, and influenced by, the same forces depicted on the Dome of the Rotunda and reflected in Rep. Shays objection to my very rational question. Clearly, the “handful of individual rulers” who have established systems of government in which human beings, allegedly “Free Americans,” have been regimented include those in charge of the pharmaceutical cartel-the most powerful special interest on Capitol Hill. These shadow governors heavily influence the CDC, ACIP, NIH, NIMH, and virtually every government agency dealing in the realm of public health and medicine.

Indeed, a review of this author’s previous books, includingEmerging Viruses: AIDS & Ebola-Nature, Accident or Intentional?,Healing Codes for the Biological Apocalypse, or Death in the Air: Globalism, Terrorism and Toxic Warfare (Tetrahedron, LLC; 1-888-508-4787) leads to the conclusion that vaccinations, deployed effectively by leading globalists and “health” organizations under their control, provide the principle genocidal weapon with which “regimentation” or population control is effected.

Are we not simply looking at standard Machiavellian theory in practice?
Machiavellian theory holds that most successful world leaders and rulers can best control populations, including politicians, through managed chaos-first creating problems then advancing solutions. The Sept. 11 terrorist attacks and subsequent anthrax mailings, addressed elsewhere on this website (See:http://www.tetrahedron.org/articles/anthrax/anthrax_espionage.html) provides a great example of this socio-economic and political dynamic. These horrific events have prompted entirely new national security, anti-terrorism, and infection control industries aside from cultural changes in which people are happier than ever to relinquish civil rights for greater promised security.

Thus, is it really farfetched to consider documentation in books and websites such as these that show the current cancer and AIDS epidemics were sponsored in this way, and that the hepatitis and hemophiliac genocides from contaminated blood products did not happen by chance or simple negligence. (Link to www.tetrahedron.org, andwww.AmericanRedDoubleCross.com) What about every war during the past century, including the “War on AIDS,” “War on Drugs,” “War on Crime,” “War on Cancer,” “War on Poverty,” “War on Illiteracy,” and current “War on Terrorism?” Are we too afraid to ask who profits most from these wars along with the great new plagues?

Massive evidence now indicates all of these social controls reflect “regimentation” wielded by shadow governors who pull the political strings on Capital Hill depicted in Brumidi’s beautiful Dome of the Rotunda. The angel, embracing medicine and money, metaphorically depicts powerful banking officials, including Rockefeller and Bush family members in America, and the Rothschild’s and British Royalty of Europe, highly influential among the worlds most powerful drug dealers, such as those directing the Merck pharmaceutical company-the world’s leading vaccine supplier and among the world’s premier “population control” (i.e., depopulation) funding agencies (besides the Rockefeller Foundation and Rockefeller directed Population Council).

Indeed, the New World Order envisioned by the select rulers about whom Roosevelt spoke is not new, nor orderly. Managed chaos, along with the current and coming plagues, including AIDS, autism, and other vaccination results, is merely symptomatic of a deeper political burden. The underlying disease bleeds humanity of both health and wealth. It needs to be exorcised-cut out and burned up in the flame of purifying truth. Each one of us has a role to play in this exorcism. It is called “bringing truth to light.” This evil darkness cannot exist in the light of truth lovingly spoken after learning the facts.

Leonard G. Horowitz, D.M.D., M.A., M.P.H. is an Honorary U.S. Autism Ambassador, Harvard School of Public Health graduate, and award winning author of thirteen books including the national bestseller, Emerging Viruses: AIDS & Ebola-Nature, Accident or Intentional? (Tetrahedron, LLC, 1998; 1-888-508-4787). He was among five panelists selected by Rep. Christopher Shays to pose questions to health agency officials who presented and defended their agencies’ actions on April 18, 2002 before the U.S. Government Reform Committee hearings in Washington, D.C., addressing “The Autism Epidemic: Is the NIH and CDC Response Adequate?” Dr. Horowitz’s complete testimony, and related information, may be viewed over the Internet at http://www.tetrahedron.org in an article entitled, “Socio-Economic and Political Correlates and Antecedents to Epidemic Autism: Public Health and National Security Concerns Regarding Vaccination as a Possible Weapon of Mass Destruction.” His prophetically titled widely acclaimed latest book, Death in the Air: Globalism, Terrorism and Toxic Warfare was released three months before Sept. 11.

Buy From CureShoppe.com for Health

Help Yourself by Helping Others Now!

Save Lives Easy With: